Lecture 8 - Chapter 1: The Logic of Subsets

The first kind of logic is very familiar. We could call it "subset logic", but it's part of what people usually call "classical logic". This is the sort of logic we learn in school, assuming we learn any at all. The second kind of logic is less well known: it's called "partition logic". Interestingly, Fong and Spivak spend more time on the second kind.

Most of us learn the relation between propositions and subsets, at least implicitly, when we meet Venn diagrams: This is a picture of some set \( X \) of "states of the world". But the world here is very tiny: it's just a letter. It can be any letter in the Latin, Greek or Cyrillic alphabet. Each region in the Venn diagram is subset of \( X \): for example, the upper left circle contains all the letters in the Greek alphabet. But each region can also be seen as a proposition: a statement about the world. For example, the upper left circle corresponds to the proposition "The letter belongs to the Greek alphabet".

I hope you know this already, but if you don't, you're in luck: this is this most important thing you've heard all year! Please think about it and ask questions until it revolutionizes the way you think about logic.

But really, all this stuff is about one particular way of getting a poset from the set \( X \). 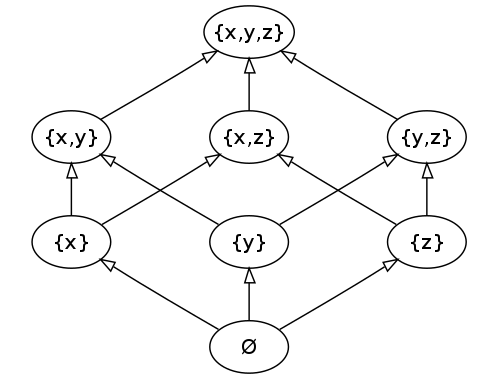 We could go on with this, and if this were a course on classical logic I would. But this is a course on applied category theory! So, we shouldn't just stick with a fixed set \( X \). We should see what happens when we let it vary! We get a poset of propositions for each set \( X \), but all these posets are related to each other.

$$ f^*(S) = \{ x \in X : \; f(x) \in S \} $$ Next time, I'll show you this monotone map has both a left and a right adjoint! And these turn out to be connected to the logical concepts of "there exists" and "for all". I believe this was first discovered by the great category theorist Bill Lawvere.